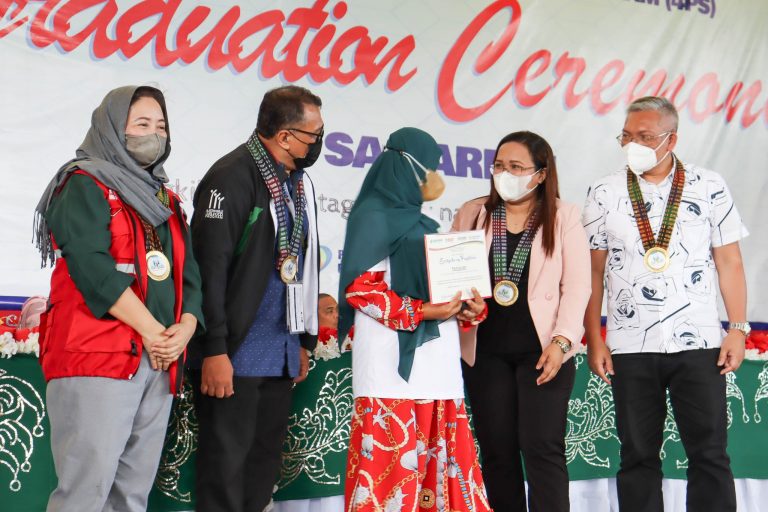 During the ceremony led by MSSD Minister Raissa H. Jajurie, Deputy Minister Nur-Ainee Tan Lim, Hon. Zulficar Ali H. Panda Sr., Director Gemma B. Gabuya, and other key officials from Department of Social Welfare and Development, a total of 167 from municipalities of Datu Odin Sinsuat, Sultan Mastura, Parang, and Upi of Maguindanao del Norte received certificates of recognition for graduating from the program.

Their graduation signifies that they have accelerated from being on the survival or subsistence level to being self-sufficient.

In her message, Minister Jajurie highlighted that this graduation from the program does not mean that the Ministry’s partnership with them is over. In fact, programs such as Sustainable Livelihood Program (SLP), Bangsamoro Sagip Kabuhayan (BSK), and Angat Bangsamoro Kabataan tungo sa Kinabukasan (ABaKa) are existing to further uplift their well-being. She also congratulated them because during the course of being 4Ps beneficiaries, they were able to improve their lives, especially their children’s health, nutrition, and education.

In her inspirational message, Director Gabuya also said that the government will continue to assist them through its sustainable programs, which will give them more opportunities to continue improving their lives. She also emphasized that exiting from 4Ps will give chance to other poor households to be part of it.

In addition to the certificates, the graduates also received PHP 15,000 each as a business capital from SLP.

Out of over 4.4 million households under 4Ps Listahanan, a significant portion of it are from Bangsamoro Autonomous Region in Muslim Mindanao (BARMM).

Since 2008, the 4Ps (formerly known as Bangon Pamilyang Pilipino Program) is a human development measure of the Philippine government, which provides conditional cash grants to poorest of the poor to improve the health, nutrition, and education of children aged 0-18.